We’ve long understood the value of Telephone Town Halls, one of our favorite programs we’ve perfected over the last 12 years. No other technique allows a candidate to have a real conversation with thousands of potential voters supporters at once.

In order to really quantify the effects of our Telephone Town Halls, we conducted a test in both a congressional race and a gubernatorial race. The results from both tests are nearly identical, indicating the accuracy of our data.

In the gubernatorial test, we worked our candidate by calling 100,000 Democratic primary voters and asking them which candidate they planned on supporting come Election Day.

Following that first poll, we split up the universe of voters into two groups: a treatment group to be invited to join our Telephone Town Hall and a control group to be excluded.

After the event, we sent a follow-up poll to the entire original universe to see if anyone changed their mind and to what extent.

Our results are pretty impressive: support for our candidate went up 11%. Not only capturing former undecideds, but also peeling off supporters from other candidates. 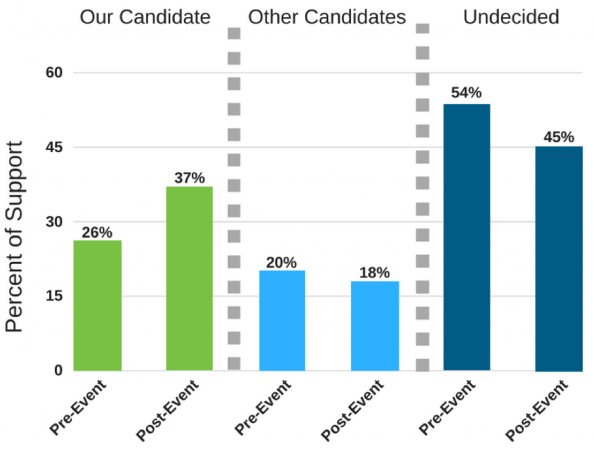 When we looked further into the data, we discovered that the amount of increased support coordinated with how long participants stayed on the line. The biggest increase is among those who stay on the event over 5 minutes. 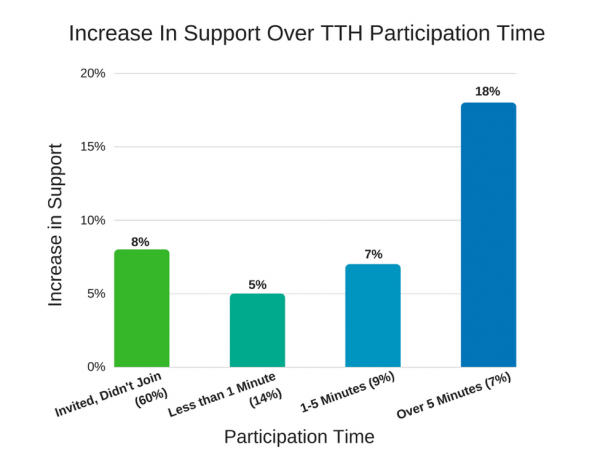 Even more exciting, support increases by 8% among those we invited to the Telephone Town Hall with an automated Pre-Call the day prior. We figure this is because the call increases name recognition and voters appreciate the candidate personally reaching out to them.

Ready to bring this level of increased support to your candidate’s race? Click HERE to set up a Telephone Town Hall with us!